I’m creating a crash test site and the cars sit flat on the road in the construction mode. When I run the program with “Physics” turned off they move as intended. When I turn on “Physics” they rotate about 15 degrees on the side and crash as intended but stay in that tilted state as they move and collide. How can I get them to lay flat on the road? 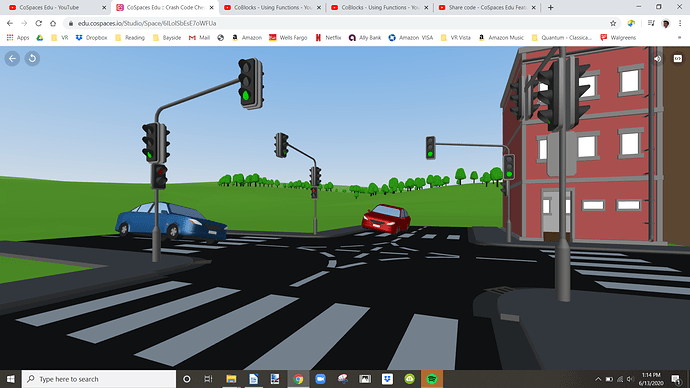 Could you, please, share your CoSpace so I could take a look.

I shared the Car Crash. I discovered that when I selected “none” in Animation the tilt on the cars disappeared but the crash was not nearly as interesting. The cars merely bump into each other. With any Animation option was enabled the tilt comes back and the cars look like they’re really crashing. It was interesting that the crash varied while I expected the same result each time. Someone put some randomness into the physics engine and this made it seem more realistic. Nice work. [

I was working on another version of this and was surprised to see the cars jump into the air and spin around anytime the Animation wasn’t set to “none”. Very strange. CoSpaces Edu :: Crash Site

If you make your CoSpace remixable, I can have a look. Otherwise it’s hard to say.

There is a bug with animated objects on which physics is enabled. The fix will be delivered with the next update that will come approximately in two weeks.

which includes speed to over come the tipping. Say to have a vehicle going 150kmph flat out in a corner. What perspective might the road need to be built at to hold the automobile in area without sliding out and what g forces would be in play