Has Anyone Made an Atomic Model?

I am looking to take students’ Boor Models into the world of 3d VR. I started working on an example, but if anyone else has one already I would love to take a look.

what atomic model do you need exactly? Could you please attach some image or description.

FYI
there is an example made by beg about water molecules

Looking for an individual atomic model rather than a molecular reaction. This is the sample I am working on, but the electrons are not all going around the nucleus properly. It is probably something simple, but I am having a brain block. I want it to work well before I have kids try and do this in 2 weeks. https://cospac.es/edu/GyRs 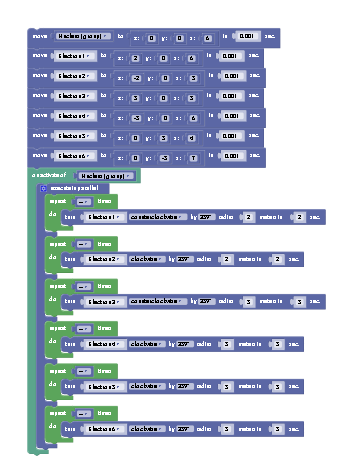 Basically, Electrons 5&6 don’t go around the nucleus, they circle out away from it. I have tried changing several things but nothing seems to work the way I would expect it to work.

Hi Brian, thanks for sharing this example!

Now when we move the cube to a different position without adjusting the orientation, this happens:

In order to have the expected movement we need to rotate the cube so that it has the correct initial orientation again.

This is why you need to adjust every single electron accordingly in order to use them together with the “turn” block the way you wanted to.

I know that it’s not easy with the spheres and this is why we have another “turn” block which takes an origin as an argument. With this block it will be possible to use the position of another object as the center to turn around. But it doesn’t work with global position at the moment. We’re going to change this in one of our upcoming updates and then it will be very easy do.

Makes sense. This should then also allow my electrons to move around the Z coordinate as well? Or will I need to use the “Move around Z” block?

With the “turn” block we used till now, only the initial orientation of the object matters. So you can turn objects already around any arbitrary axis.

In the other “turn” block with the origin parameter we are going to use the direction vector to determine the axis. So it is going to be a lot easier and precise (after we updated the behaviour of this block).