I am presenting at a conference next week designated specifically for science teachers from K-12. As they range in all areas of science I am wondering if anyone had a space to share of their own or of a student that is specific to any discipline of science.

I have seen spaces that focused on balancing chemical equations (one I am also doing this year) and I am working on a weather forecast space now. You could easily do ecosystems, food chains, planetary motion (I saw one on planets a LONG time ago in the gallery before the split). I also had kids build chain reactions similar to Rube Goldberg machine like creations that used simple machines.
There are lots of possibilities.

I did a project on the Solar System with 5th graders. Student examples, lesson plan, and resources can be found here: https://sites.google.com/view/cospaces/student-projects/gr-5-solar-system-project

Thanks for reaching out. When is the conference? It sounds really cool! I hope it goes well. Perhaps you could also showcases the physics tool?

We have some spaces that you could use, what about these:

This space demonstrates our Physics simulation used with CoBlocks!

I’ll have a talk with some members of the team and see if they can recommend any spaces, too. You could also try reaching out to people on Twitter

Thanks everyone much appreciated. I can think of many examples but as a technology integration mentor most of my work in classrooms has been at the entry level (getting started) or specific to another subject.

Ben, the conference is this Friday. I have 2 sessions on the go. They were capped at 30 participants per session but I am being asked to squeeze in more teachers so the numbers should be larger.

I have 75 minutes per session so we wil definitely get into some of the physics features.

Hey, this project is still incomplete (lots more to add as a template), but I am working on a sample weather map for kids to create their own weather forecast. Feel free to share it with the knowledge that it is still being developed.

Just bumping this thread as we have some Science teachers very interested in exploring CoSpaces for their Yrs 3-6 Classrooms. I built a physics simulator for our K-2 students and had different scenes for Earth, Moon and Underwater. We also had a scene that was to teach the students the effect of changing bounciness and friction. The last scene was built by the CoSpaces team and was added because the students loved it so much, highly engaging when they shared it with their parents!

Forces Impact the world around us 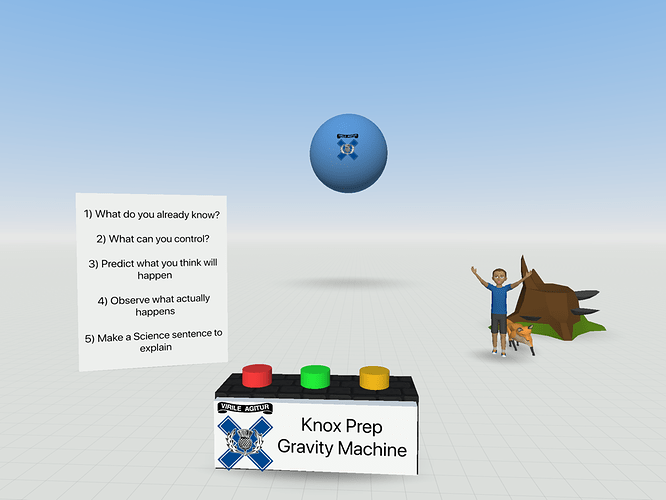 CoSpaces Edu :: Forces impact the world around us

Forces impact the world around us by IanFAIRHURST

Are there any more Science specific CoSpaces that people could share?

Thank you, will take a look.